Following the theory that our brains are hardwired to find god. 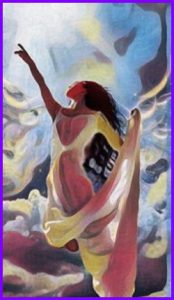 1. Fight-or-flight response: the response that enables us to survive in the face of danger. This response is linked to a God who wants to protect us. He is like a parent who looks out for the safety of a small child. We turn to this God because we need to survive.

2. Reactive response: this is the brain’s creation of a personal identity. Beyond mere survival, everyone pursues the needs of “I, me, mine.” We do this instinctively, and from this response a new God emerges, one who has power and might, laws and rules. We turn to this God because we need to achieve, accomplish, and compete.

3. Restful awareness response: the brain can be active or at rest, and this is its response when it wants peace. Rest and activity alternate in every part of the brain. The divine equivalent is a God who brings peace, who enables us to find a calm center in the midst of outward chaos. We turn to this God because we need to feel that the outer world isn’t going to swallow us up in its endless turmoil.

4. Intuitive response: the brain looks for information both inside and out. Outer knowledge is objective, but inner knowledge is intuitive. No one checks with an expert outside themselves before saying “I am happy” or “I am in love.” We rely on our ability to know ourselves from the inside out. The God that matches this response is understanding and forgiving. We need him to validate that our inner world is good.

5. Creative response: the human brain can invent new things and discover new facts. This creative ability apparently comes from nowhere – the unknown simply gives birth to a new thought. We call this inspiration, and its mirror is a Creator who made the whole world from nothing. We turn to him out of our wonder at the beauty and formal complexity of Nature.

6. Visionary response: the brain can directly contact “the light,” a form of pure awareness that feels joyful and blessed. This contact can be bewildering, because it has no roots in the material world. It comes as a vision, and the God that matches it is exalted – he delivers healing and miracles. We need such a God to explain why magic can exist side by side with ordinary mundane reality.

7. Sacred response: the brain was born from a single fertilized cell that had no brain functions in it, only a speck of life.Even though a hundred billion neurons developed from that speck, it remains intact in all its innocence and simplicity. The brain senses this as its source and origin. To match it, there is a God of pure being, one who doesn’t think but just is. We need him because without a source, our existence has no foundation at all.

These seven responses, all very real and useful to us in our long journey as a species, form the unshakable basis of religion. If you compare any two minds – Moses or Buddha, Jesus or Freud, Saint Francis or Chairman Mao – each projects a different view of reality with a matching God. No one can shoehorn God into a single box. We must have a range of vision as vast as human experience itself. Atheists need their God, who is absent and nonexistent, while at the other extreme mystics need their God, one of pure love and light. Only the brain can deliver this vast range of deities.

According to evolutionary psychology, people today still seek those traits that made survival possible then: an instinct to fight furiously when threatened, for instance, and a drive to trade information and share secrets. Human beings are, in other words, hardwired. You can take the person out of the Stone Age, evolutionary psychologists contend, but you can’t take the Stone Age out of the person.