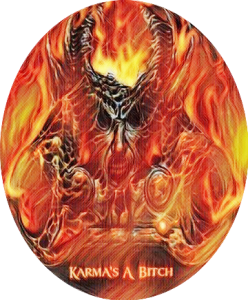 At it’s simplest, karma is the theory that everything you do has a consequence.  How karma is understood is very much a question of faith, religion (or lack of it) and what your belief system is.  With today’s new age following of witchcraft and psychics, it is common to think that karma is a bad something something that comes back to ‘bite you in the ass’ for bad deeds. It is often used as an ‘I told you so’ taunt or as a threat when we feel we have been wronged, hence the saying ‘karma is a bitch‘!

Positive karma is an arbitrary concept that all the good we do is balanced against the bad and the end results in positive karma when the good outweighs the bad. Sanskrit suggests 3 types of karma:

Another less than specific idea is that when we do more harm than good the end result is negative karma for which we will pay at some point.  A very silly concept adopted and misused by social media.  Frankly, barely worth the time to write about.

So here is what I really want you to think about.  Whilst karma in this lifetime is real enough, (you will all know examples of when you have wished someone get their ‘just desserts‘ or have seen something happen to someone and said “KARMA”!), you will be very aware that there are people that simply ‘get away with murder‘ some even literally.  So now I am going to write no more other than to ask if you believe in reincarnation and which of these statement may be true.

As a spiritualist, I believe the latter.  So do I believe in karma?  In a way, yes.  I believe we may live a life walking in the shoes of people we have wronged in order to see a better way and progress our souls.  That said, with reincarnation, if anyone tells you the KNOW for sure how karma works, then I suggest they don’t or they simply would not need to be here in another life having all the answers.

Karma is karma and if you believe then spiritual karma is no different to karma itself other than the fact that we attach spirituality, faith or religion to the reasoning behind it.  Karma is simply and always the consequence of past actions. Spiritual karma, in one sense, means we should take the opportunity to heal and balance through life and our relationships and in doing so learn spiritual lessons. Thus the meaning of spiritual karma implies we have some sort faith or religion in the concept of redemption through karma and good deeds.

Do you have Bad Karma that is not yours? OMG, I saw this online and I am speechless.  What a load of crap and I seriously hope no-one listens to that sort of rubbish.  No such thing as FALSE KARMA!!!